Freedom of religion or belief in sharp decline in Asia, a European Parliament report says

On 22 March, MEPs Peter Van Dalen and Carlo Fidanza made public their 45-page report “The EU and Freedom of Religion or Belief 2017-2021” at the European Parliament in Brussels.

Willy Fautré, director of Human Rights Without Frontiers, was invited as a guest speaker to share his views about the situation in Asia.

“First of all, I would like to very warmly congratulate the Intergroup on Freedom of Religion or Belief of the European Parliament and the authors of this extremely well-documented report which highlights the accelerated decline of religious freedom in a number of countries.

I have been asked to share my views on this issue in Asia, a huge continent. One thing is very disturbing in the report. Among the 11 countries selected by the Intergroup for the deterioration level of religious freedom, 8 are from Asia: Afghanistan, China, India, Iran, Myanmar, Pakistan, Turkey and Vietnam. A couple of them are Communist countries and the others have a dominant religion enjoying the support of the state and public institutions, either Sunni or Shia Islam, Hinduism or Buddhism.

These Asian countries total a population of 3.4 billion people, which represents 42% of the world population.

Religious minorities in such contexts are vulnerable to all sorts of arbitrary restrictions, discrimination, social hostility, violence and killings.

The increasing denial of freedom of religion or belief covers a wide range of issues:

In Pakistan, where the dominant religion is Sunni Islam, Ahmadis are banned as a heretical group. There are also laws criminalizing apostasy and alleged blasphemous behaviours punishable by life imprisonment and even by death.

In our database of religious prisoners, we have documented cases of 16 Ahmadis and 26 Protestants, a number of them being on the death row.

In practice, there are forced conversions of young girls from non-Muslim minorities after they have been kidnapped and forcefully married to Muslim men.

There is also a persistent climate of extreme social hostility and mob violence against Christians and Ahmadis leading to killings.

In India, where Hinduism is the dominant religion, anti-conversion and anti-blasphemy laws similarly breach the right to change religion and restrict various forms of expression about religious issues.

Discriminatory laws inspired by religious nationalism negatively impact the lives of non-Hindu citizens and residents in India, leading to hostility, tensions and mob violence against Muslims and Christians.

Laws denying access to foreign funding have forced Amnesty International to close its office in India and have restricted the health and education activities of religious caritative institutions.

In Iran, all laws and regulations are based on Islamic criteria and the Sharia is strictly applied. This results in religious minorities, especially Christians, Baha’i and non-Shi’a Muslim minorities, being persecuted by the government and being subject to unjustified prison sentences. Muslims are prohibited to change or renouncing their religious beliefs and proselytizing or just attempting to convert Muslims is punishable by death. In our database of religious prisoners, we have 51 documented cases of Baha’is, 12 Christians and 7 Sufis.

In Myanmar, there is the extreme and persistent persecution of the predominantly Muslim Rohingya community, resulting in violence and a massive exodus of Rohingyas into neighbouring country Bangladesh, which has been going on since 2016. Last year, the military grabbed power and went on fueling Burmese Buddhist nationalism, which leads to violence and discrimination, especially towards Muslims and to a lesser extent Christians.

In Turkey, increasing religious nationalism is also propagated by the government. Under president Erdoğan,. Erdogan is publicly targeting atheists, Christians and Jews.

This hostility comes in the form of lacking protection and government support for minority religious sites. The famous Hagia Sophia in Istanbul was even converted from an Orthodox Christian church into a mosque. Furthermore, the government is implementing a ban on foreign religious workers, such as Christian evangelists, which is also leading to their expulsion.

In Vietnam, an atheist Communist country, the government is actively persecuting religious minority groups, in particular those which are denied registration imposed by a law since 2018 on the ground of national interest, public order or national unity. This mainly concerns Christians from the Hmong and Montagnard minorities as well as Buddhists from the An Dan Dai Dao and the Hoa Hoa groups who refuse to declare loyalty to the Communist Party. In our database of religious prisoners, we have documented cases of 26 Buddhists, 8 Protestants and 2 Catholics.

In Afghanistan, even before the shift in power last year, Islamic doctrines were already incorporated into the country’s laws. This resulted in the criminalization of blasphemy and apostasy with the possibility of the death penalty as a result. The situation has become ever more concerning since the Taliban reclaimed power after the allied forces left the country in the summer of 2021.

Last but not least

In China, the government is becoming more and more authoritarian in all its policies, enforcing a so-called sinicization of society, in which religion is seen as a threat to the official atheist ideology.

Under the guise of sinicization, Xi Jinping has banned a number of so-called undesirable religious groups and reinforced the full control of the Chinese Communist Party over all sectors of society, including all religious groups.

One or two million Uyghur Muslims have been and are allegedly politically reeducated in detention camps. All religious groups have people in prison, especially those that are banned like Falun Gong.” 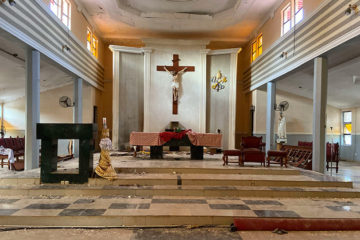 According to EU, the Pentecost massacre has nothing to do with religion

Dozens of Christians massacred in a church, attending service, standing under a crucifix with their children, and Europe says it is ” shocked. ” But ” the root causes of this insecurity in Nigeria are Read more…