Peter van Dalen is a Member of the European Parliament for the Netherlands. His political party is the ChristianUnion and in the European Parliament he is a member of the EPP Group. He is currently serving his third term. Van Dalen was educated in history, law and international relations, worked as a teacher and many years for the Dutch Ministry of Transport. Mr. Van Dalen is an active member of the European Parliament committees on Fisheries (PECH) and Human Rights (DROI). From the start of his first term, Van Dalen has worked for the promotion of freedom of religion or belief. He initiated the first parliamentary debate dealing exclusively with religious freedom, in 2011. Van Dalen has written many parliamentary resolutions on the subject and is behind many initiatives such as events, letters and parliamentary questions on the situation of religious and faith communities. 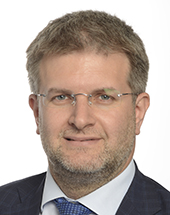 Carlo Fidanza was elected at the European Parliament for his second term in 2019. He now serves as Head of the Italian delegation in the ECR group at the EP where he serves as member of IMCO committee and TRAN committee. At national level, he is Head of Foreign Affairs for Fratelli d’Italia, his party. He is also Co-Chair of the FoRB intergroup as he is deeply committed to the promotion of freedom of religion or belief. In his work at the European Parliament and at national level, he organizes several initiatives in defense of persecuted religious communities around the world.

Ruissen studied plant science at Wageningen University and Research in The Netherlands. In 1995 he became assistant to MEP Leen van der Waal in the European Parliament. Later he worked as advisor for EU Agriculture Policy at the Ministry of Agriculture, Nature and Food Quality.

Out of concern for our future and that of our children, Joachim Kuhs joined the Alternative for Germany in March 2013. Since then, he has been and continue to be active in various functions at municipal, district, state, federal and EU level. Joachim Kuhs currently serves as a member of the EU-parliament since July 2019. He is also federal board member for Christians in the Alternative for Germany. At the local level, he contributes as chairman of the AfD district association in Baden-Baden/Rastatt.

His concern is the strengthening of the traditional family, consisting of mother, father and child(ren). Better education for our children is also a priority for him. He would like to give a voice to people who have no lobby, such as the unborn, the disabled, the demented, the homeless, forced prostitutes and persecuted Christians.

The Intergroup Secretariat is temporarily run by a parliamentary assistant of MEP Peter van Dalen and of MEP Fidanza. The Intergroup does not endorse views or opinions expressed when made by the secretariat staff in their other positions. If you would like to contact them, please email secretariat@religiousfreedom.eu